Road to the Final Fish: Bracketology

Cheeky Fly Fishing is hosting a March Madness bracket for all of you who are fishermen and not basketball fans. Even if you do follow hoops, this bracket is fun too. Go to http://www.cheekyflyfishing.com/news to enter your bracket and vote for the sport fish of Bristol Bay. 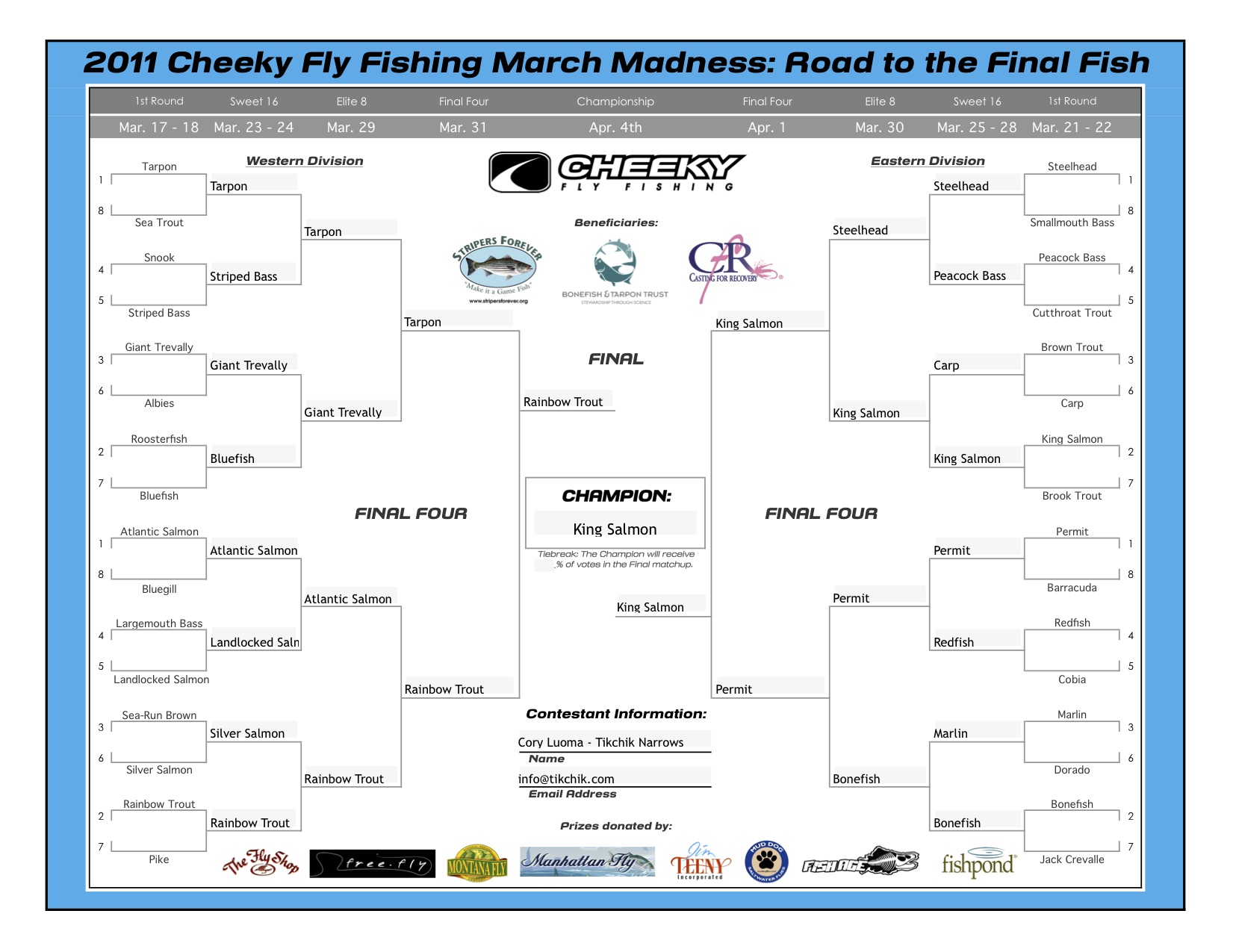 So, here’s my run down for my picks for this year’s field of fish.

1. I see Bluefish surprising the Roosterfish in the opening round. Their eagerness and ability to hit the surface with ferocity will be too much for the Roosterfish of Mexico and Central America.

2. The Silver Salmon have a great chance of knocking off the Sea-Run Brown. Not only did the Silver Salmon have an impressive post-season run up at Tikchik last year, but they are forecasted to come on strong this coming season in Bristol Bay. Look for the silvers to do some damage this March.

1. The Tarpon seems to have the easiest road to the final four. It will have to get past a feisty fish in the Giant Trevally, but I see the spectacular leaping ability of this megalop to be simply too much to handle.

2. I have another tropical saltwater fish in the Permit getting past the likes of the Redfish and Barracuda to make their first Final Four. Their ability to snatch up invertebrates and roam the flats and channels make them a top contender.

3. The King Salmon will have a difficult road as it faces the grace and beauty of the Brook Trout and the new kid on the block in sport fishing, the Carp. The King Salmon exhibits too much power and determination, and will eventually overcome its weaker competitor. I believe that the King Salmon will be the eventual winner of this year’s tournament.

4. Lastly, I have chosen the rainbow trout to make a push to the top 4 spots. Although they were granted only a 2 seed, their colors and explosive shakes and leaps will be difficult to contain. Their tournament experience will overwhelm both the Pike and Silver Salmon.

1. I thought the arctic char should have gotten an at-large bid this season. You look at their resumé and RPI this past year and it is clear that they deserved a spot in this field of 32.

2. Another Bristol Bay fish that I think got the short stick from the selection committee was the Chum “Dogfish”. We saw this past year what a Chum Salmon is capable of when it is strong and fresh in the river. They should have gotten a chance over the Bluegill.