By Ray Tedesco from The Angling Report

Ray Tedesco gives excellent marks to the fishing he enjoyed at Tikchik Narrrows Lodge (www.tikchiklodge.com) in Alaska, where he spent a weeklong stay this past June with his brother, his nephew, and a friend who brought his son along during the lodge’s “family week.” He writes: 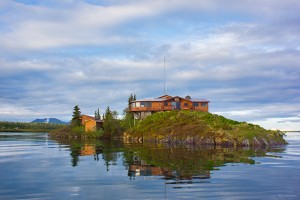 “Tikchik Narrows Lodge is hard to top as a high-end, fly-out Alaska fishing lodge. First and foremost, the lodge has a lot of great fisheries to choose from, including some semi-private water that owner Bud Hodson leases. We fished various sections of the Upper Nushagak for bows, grayling, and Dolly Varden, and floated on the Nushagak River for king salmon and the Agulapak River for char. We also had chances to fish for lakers and char at the narrows in the bays around Tikchik Lake.

“We came for opening week during the king salmon run on the Nush River, which is absolutely banner. Every boat caught around 20 to 30 kings per day, and I mean big fish that weighed up to 35 pounds. On one fly-out this year we had the opportunity to float the Agulapak River. I’ve always wanted to fish the Pak, and we had a great morning there until the winds made the outlet too dangerous to float. Unfortunately, the wind came up just as the char were busting smelt. That scratched our only opportunity to participate in a smelt run that week, because the smelt had arrived later than usual. On the bright side, plan B for that day yielded 25-inch and 22-inch rainbows for my young, first time fly-fishing partner.

“My group was the first of the season into an outpost camp called Sunset Camp on the Upper Nush, which as excellent small stream fishing. The rainbows there fought like champs even by Alaskan standards, and the grayling were abundant. We also caught chum on the fly and a few sockeyes.

“Tikchik Narrows Lodge is located in an absolutely vast and remote area that offers a huge number of good fishing choices. Fishing at Tikchik is accessed by daily fly-outs from the lodge, which provide outstanding scenery, one of the highlights of the trip. The lodge has four planes and some 30 jet boats, plus it runs several outposts camps that can be moved from river to river each week of the season. The outpost camps have large, comfortable Weatherport tents with wood floors built on platforms. All of the camps have outstanding cooks and managers. I should also note that the lodge provides gear, if needed, and has top-notch fishing equipment to lend as well. This was the first trip I’ve taken where I did not travel with my rods.

“Owner Bud Hodson and head guide Chip have a very organized operation here. The guides were highly qualified and a lot of fun to be around. The same can be said of the rest of the lodge staff. The food was excellent, and there werecocktails and cold beers waiting as soon as we got off the plane for the day, a nice touch. Bad weather can be a problem here, of course, just as it can be all over Alaska, but given the number of options that Bud has at his disposal and what I saw of the lodge’s operations, I would be surprised if anyone did not have a top rate experience here. Fishing the Wood-Tikchik area for three weeks or so would be a dream well worth saving for. I would particularly like to go back again for the August rainbow and silver fishing.”